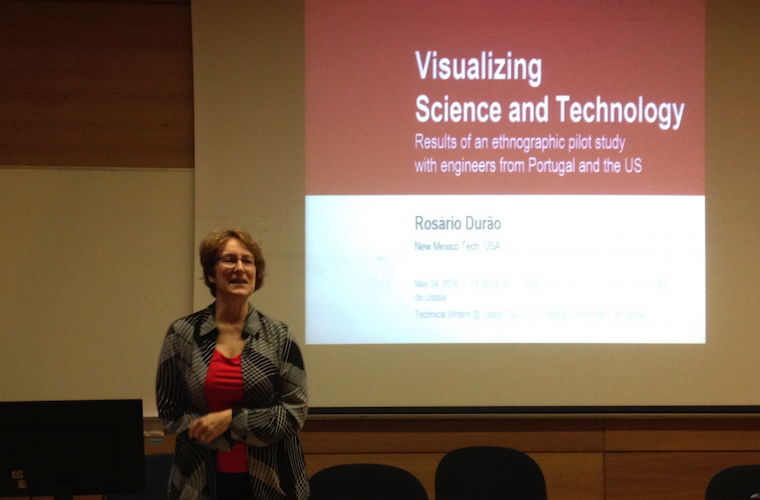 Eleven people attended the presentation by Rosário Durão at ISCTE. She presented her ongoing research on ways to visualize science and technology.

The VISTAC research project aims to distinguish between what is universal and what is culturally specific in different parts of the World.

The inspiration came from observing differences between her own students at New Mexico Tech. She proceeded by asking a few students to visually represent some universal concepts for people in their own culture. The results exhibited distinct cultural influences, such as:

That’s how VISTAC was born as an international research project. Rosário expects the long-term study to continue until she needs a walking stick. Right now she can only present preliminary results from a pilot study on engineers.

About half a dozen researchers have been conducting ethnographic interviews of engineers. The interviews themselves have also shown cultural differences:

Rosário succeeded in interviewing four civil engineers, including a few in Lisbon.
She found these engineers surrounded by paper, computers, and smart phones.
They used whatever was more effective.

She presented the following preliminary results about civil engineers:

You may know that Rosário Durão helped bootstrap the group Technical Writers @ Lisbon back in 2013. Last year we organized a formal event when she was in Lisbon, and she treated us with a first-class workshop about active learning. Unfortunately, we could not secure a room to have a similar event this year. Instead, Rosário will present her research projects at two Portuguese Universities.

The VISTAC – Science and Technology Visuals in Action Engineering Pilot Study aims to understand how engineering professionals use, produce and speak about/reflect on S&T visuals, in their workplaces. Through preliminary surveys, onsite ethnographic and video-ethnographic observations, and reflective interviews, the study seeks to answer the following research questions:

More information on the VISTAC homepage.

Thanks to our sponsors for all the support: EuroSIGDOC (room and site) and APCOMTEC (marketing). And special thanks to Rosário Durão for her willingness to share.

PS: We are trying to put together events on June 8th (evening) and June 18th (morning or whole day). Stay tuned.

PPS: How all communication fails, except by accident — Jukka “Yucca” Korpela (2010)