EuroSIGDOC was well represented in the 3rd ACM Europe Chapters Workshop (Prague, aug. 25-26) by our chair and treasurer. And it ended with one more member, a French ACM Member, who proposes the presen 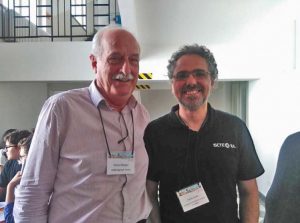 The workshop counted some 50 attendees, representing 25 European chapters, covering Europe from Ireland to Azerbaijan and from Sweden to Portugal, including also Israel. The ACM headquarters were present with Alex Wolf, a past president, and its CEO Bobby Schnabel.

Some major points :
– a quite strong presence of ACM-W (ACM women)
– a major challenge to the ACM chair is to introduce “more philanthropy” in the associations issues,
– the project of a all-Europe all-Sigs event in 2017, each chapter participating along its own lines and agenda; this project wa proposed by Avi Mendelsohn, and strongly welcomed by the audience ; the best theme would autonomous cars,
– the nex CECL (Commitee of European Chapter Leaders, http://europe.acm.org/chapters.html) will be held in Barcelona (not so far from Lisbon …).

Personally (but I was not alone on this point), I feel that ACM communication processes could be substantially enhanced
– to make a deeper and more stimulating use of new communication technologies, notably to reduce the CO2 costly practice of face-to-face international meeting
– to aim to a less top-down (typically university teacher/student) and more peer-to-peer thinking and acting.

Perhaps could we, EuroSIGOC, play an active role in such an evolution. It is clearly in our object “the design of communication”. And its European basis frees us from the constraints inherent to the worldwide structure.